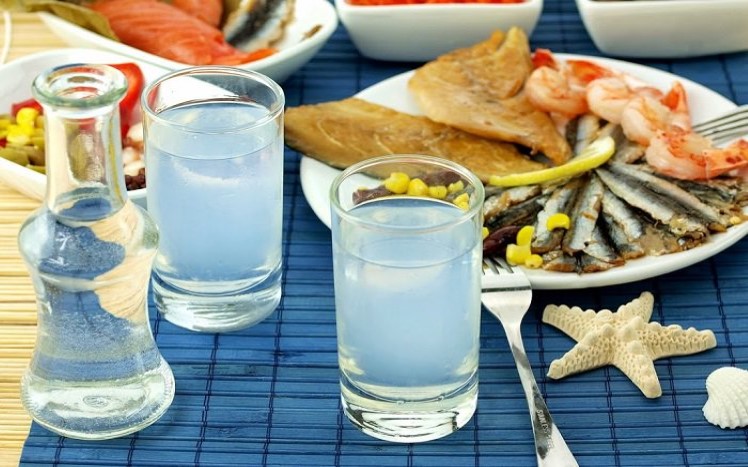 Those who share this particular flavor, come closer, speak more easily. Ouzo is the drink of companion and confession.

Ouzo drinking is an art. Or maybe it’s a way of life, says Matt Barrett, an American writer on Greece. But it’s not the ouzo, it’s who you drink it with that really makes the experience, he adds.

The key to drinking ouzo is to eat snacks known as mezedes. These keep the effects of the alcohol from overwhelming you and enable you to sit and drink slowly for hours in a profoundly calm state of mind where all is beautiful and life is fine, Barrett says.

Ouzo is an ideal accompaniment for sardines and other salted seafood such as herring and anchovies, as well as for fried squid, whitebait and other small fish.

The same applies for all grilled seafood, like octopus, calamari, and certain large fish grilled with lots of sea salt.

Ouzo also suits olives; olives with Ouzo is a favorite meze in olive-producing regions, such as Kalamata and Lesvos.

The name “ouzo” is patented as Greek alcoholic beverage since 1989 which means that it can be produced and named in this way only in Greece. Some places with a long tradition in distilling ouzo are Tirnavos and Kalamata. But the most popular of all is definitely the island of Lesvos with ouzo of Plomari being the best example.

Its production demands special skills; part of it is produced by distillation and a larger part is water flavored with various aromatic herbs, of which aniseed prevails. In Greece, ouzo is popular during lent (Sarakosti), and of course, throughout summer.

In the contemporary big city, the proposal “let’s go for Ouzo or Ouzakia” has a special meaning. Its prerequisites are a large company of friends and lots of ‘kefi’ (a Greek term that can only be translated as ‘appetite for fun’). It might be a Saturday or Sunday afternoon and the bottles finish quickly, one after the other.

But be careful; in large quantities, ouzo leads to very bad hangovers! Thus, for those who drink it, it’s not always a pleasure. Nevertheless, it still has its special position in the life of the city.

Literature scholars believe the name ouzo to come from the ancient Greek verb “to smell,” or “ozo.” Romantics prefer to think it comes from the phrase “Ou zo,” or “Without this I can’t live.”

Others see its roots in the Turkish word for grape, “uzum,” and others say it can be traced back to a story about a Turkish consulate doctor in Thessaly in the 18th century who tasted the local raki and cried out, “But this is uso di Marsiglia!” The phrase, meaning “for use in Marseilles,” was at the time stamped on crates of silk worm cocoons exported from Thessaly to major merchants in the French port, and had become synonymous with any product of excellent quality.

All this fascinating information and more is available on the website, tsou.gr, an online temple to ouzo. Created by ouzo fan and collector of rare bottles of Greece’s national drink, Haris Bekris, it aims to become a platform that will bring together friends of the aromatic spirit from all over the world.